‘As a Family, We Don't Live in the Past,' Says Gareth Thomas 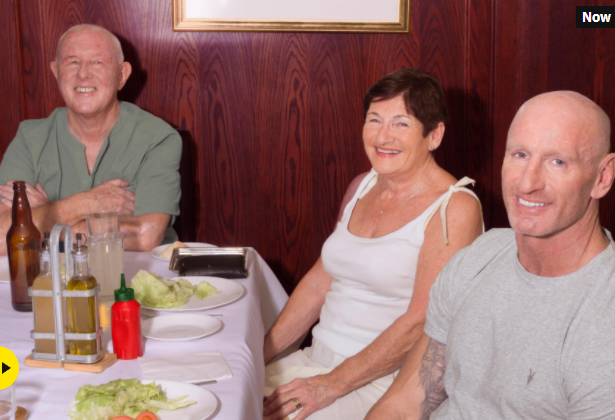 Gareth Thomas, the former Wales and Lions rugby captain, was born in Bridgend, Wales, to Yvonne and Barry Thomas and two elder brothers. He's been a force on the field since the late 1990s, and his advocacy work has arguably made him an even more powerful presence.

Thomas has raised awareness about LGBTQ+ representation in sports and mental health since coming out in 2009. He's striving to de-stigmatize HIV, first with his 2019 documentary HIV and Me, which addressed his dread of telling the public about his diagnosis, and now with Tackle HIV, a campaign he's launching with ViiV Healthcare and the Terrence Higgins Trust.

He and his spouse, Stephen, reside near Bridgend. Visit tacklehiv.org for additional information, and follow @TackleHIV on Twitter.

This shot was taken in Benidorm when I was around ten years old, and it was our first family vacation overseas. We had a lovely, elegant lunch that night, and a waiter with a large bushy moustache snapped our picture. My parents spent an arm and a leg for it, which arrived in a cardboard frame.

I was a rambunctious youngster, full of energy and easily led. As a consequence, our home was in disarray.

It was always a competition between my brothers and myself to be the alpha male. My parents had to keep the chaos under control from the time we woke up to the time we went to bed. However, I was never spoilt and was aware of how hard my parents worked to provide for us.

Despite the fact that I was given the chance to participate in a variety of sports – from karate to boxing, there isn't a sport on the globe that I haven't tried - I was taught that nothing comes for free. I've never been permitted to be famous because of my background, and I've never forgotten where I came from.

It took me more than 20 years to figure out who I was and embrace myself. For 47 years, my parents have been the most significant persons in my life. "You know what?" I'd say all of a sudden.

"I am gay, and I want to tell you right now so you can accept it," I felt was a selfish gesture. "Why did you feel you couldn't tell us?" they asked, rather than rejecting me. Why did you feel compelled to wait till you didn't have any other choice?"

I feared I was going to die when I found out I had HIV. That's what I deduced from 1980s advertisements. When a reporter informed my father of my diagnosis, I was in the vehicle with my parents.

I'd known the press was on to me for a few years, but what occurred that day was a step too far down the drain. Dad was taking me to the train early in the morning so I could go to work in London.

As we exited the driveway, there was this man standing in the road, and my father, being the gentleman that he is, drove over to check if he was okay. He rolled down the window, and the reporter peered in, asking my father whether he had any thoughts about his son's HIV status.

The ride to the station seemed strange in an ancient automobile. I kept my word and went to work, but it was a nightmare. I was trying to convince my mother on the way back, on a crowded train, in and out of tunnels, that what the journalist was telling Dad was real, that I was HIV positive but would be OK.

I was robbed of the opportunity. When I was ready, all I wanted to do was sit down and say, "You know what? I'm not going to pass away. Your kid will be in the area." It's not how I wanted to have that chat on a train, with your signal going off. It was quite painful for me.

Because of what we've gone through, we're no longer scared to educate others or to confront those who speak about HIV in a discriminating manner. HIV isn't simply a problem for gay men or Africans, and it can be cured.

When it comes to overcoming the stigma, family is crucial. The lack of comprehension is something that is carried down through the generations.

We are all pretty proud of ourselves these days for having this expertise. It has given me a sense of power.

This vacation was the culmination of a lengthy journey. It's the only way we could afford to send all of our children to school in another country. The youngsters, on the other hand, thought it was fantastic.

Every day, we had chocolate waffles. We were being pursued by wasps. We had a good time.

I worked as a secretary with children in foster care, washed clothing, and worked in a business across the block to supplement my income so that I could offer my three sons what they wanted. Gareth was frequently in trouble at school and cost us a lot in sporting equipment.

"Gareth seems to believe he was put on this earth to entertain everyone," according to one source, and "he has the concentration level of a gnat." We didn't need to be told; that was simply the way he was.

He dropped out of school at the age of 15 because he disliked it. He worked at several jobs until being given his first professional role, which paid £200 per week and included a used Volvo. "If I were you, I'd stick with the Post Office," Barry said. "This rugby thing will never catch on." It's a good thing he didn't pay attention.

Because I didn't know any better, when Gareth informed me about his illness, I believed it was the end of his life. We've learnt a lot since then. I've been astounded by the amount of effort put into developing new medications — it's as if HIV is still taboo.

Gareth has been through a lot — if you think what he's stated publicly [about his mental health] is awful, imagine what he's been through privately. But we don't live in the past as a family.

What's done is done, and there's nothing you can do about it. All you can do is go ahead, and although I'll never understand why that reporter felt compelled to do something so heinous, we've survived, and I'm glad to see my kid as happy as he is today.

That is the most important thing. But, for the love of God, we'd never go on vacation together again. Barry and I are looking for some peace and quiet.

I recall the trip to the railway station as if it were yesterday. "Drive on, Dad, drive on," Gareth urged after the altercation with the reporter. He turned to me after we'd pulled over and said, "Dad, I'm very worried." "I'm at a loss for what to do."

"Don't worry, you'll be fine," I replied. "We'll be fine." I left him off at the train station and promised him that everything would be OK.

I returned home to find a knock on the door from the same reporter, who had his hand in his pocket with a dictaphone in it. I closed the door after giving him a cold stare. I didn't say anything to the guy; my demeanor told it all: get out of here.

We've made it a point to remain connected as a family since our sons were born, through thick and thin. We wanted to take some of the weight off Gareth when he informed us he was homosexual, so we purchased some champagne to celebrate the rest of his life.

Gareth has considered suicide on many occasions over his life. Since then, I've informed him that if you hadn't done that, we would have known nothing about what you were going through or HIV. Everything would have been void. We'd be left in the dark, and you'd be gone. And we all feel things together in our family.

Thanks to Harriet Gibsone at The Guardian whose reporting provided the original basis for this story.