Can Art Survive in Sudan? The Signs Are There... 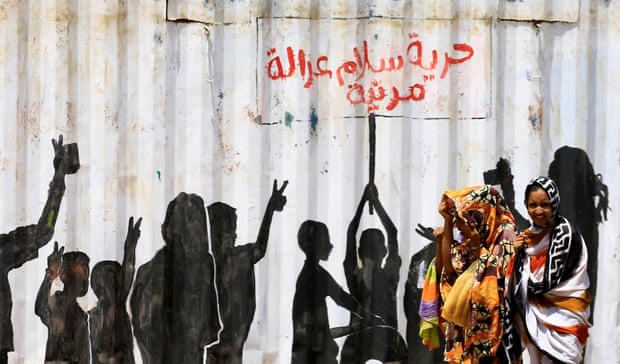 Suzannah Mirghani visited her native country for the first time in years in 2019, at the start of a euphoric post-revolutionary period. Her aim was to make a short film on Sudanese territory. It turned out to be quite simple.

"There was this exuberance when the revolution happened," she explains from her Qatari home. "We were granted permission to create our film when we arrived. 'Anything you want,' we were informed.

"No one bothered us." Nobody instructed us on what to do. We were not asked for the script. "I call this period in Sudan's history 'the honeymoon,'" adds Mirghani.

Mirghani feels the honeymoon is ended, at least for her, more than two and a half years after the overthrow of longstanding autocrat Omar al-Bashir. Sudan is now again engulfed in chaos, and she believes she will not be able to return safely.

Mirghani had to make an acceptance speech that was everything but joyous on October 31st, when her film, Al-Sit, received the latest of many prizes.

Six days earlier, the military had taken control in a coup, arresting the civilian prime minister and putting an end to the country's nascent democratic transition.

Mirghani stated the active encouragement offered by the civilian-military partnership administration was "the only reason" she and her team were able to create Al-Sit in a video speech from Qatar to the Africa in Motion film festival in Scotland. "We're now in grave danger of reverting to the bad old days of military rule and suffocating creative expression," she warned.

A lot has transpired since the coup: massive pro-democracy rallies erupted in Khartoum and other towns, with at least 40 protestors dead.

Abdalla Hamdok, the prime minister, was freed after almost a month as part of a bargain with the coup commander, Gen Abdel Fattah al-Burhan.

However, demonstrators who want the military to stay out of politics for good are skeptical, especially when security forces fire teargas into the masses who have gathered despite Hamdok's return. Sudanese artists feel compelled to speak out since the revolution's artistic successes are now under jeopardy.

"If the military government remains in power, we artists will be the first to be targeted," warns Aamira*, a painter, in an email from Khartoum. "We're demonstrating in the streets, unarmed, in the face of guns." There's nothing to be afraid of now."

Hamdok defended his choice to cut a deal with the military in an interview with the Financial Times last week, saying it was necessary to halt the violence and "preserve the achievements of the last few years."

One of those accomplishments, while it may not have been front of mind for him, was the blossoming of a creative community that had long been hounded, censored, and driven into the shadows. "I painted Omar al-Bashir as the [face of] coronavirus in a stadium in Bahri during the daytime, which would have been just impossible; my entire family could have been killed two years ago," says Assil Diab, a street artist.

Diab returned to Sudan in 2019 after feeling compelled to return amid the revolutionary fervor and made a name for herself by painting the faces of the revolution's "martyrs" on the outside of their families' homes, with a getaway car nearby in case the notorious paramilitary Rapid Support Forces saw her.

The revolution's "absolute elation" produced artistic effects for Mirghani. The tale of a Sudanese rural girl whose parents want her to marry the sharp-suited son of a rich cotton merchant in Qatar is told wonderfully in Al-Sit. "It's incredible to be able to finally express yourself, to say what you've wanted to say to these people for the past 30 years."

"Women's rights are the subject of my film." It's a social satire about arranged marriages. Mirghani adds, "I don't think we could have said that a few years ago."

The "honeymoon" did not come without its difficulties. Although the dictator was no longer in power, social and religious conservatism — as well as an unwillingness to support the arts – persisted. The acclaimed filmmaker Hajooj Kuka and many others were imprisoned at a theatre workshop in 2020, indicating that artistic freedom was uneven.

Although the "direct censorship" of the Bashir period has reduced in the capital, Asim*, a documentary filmmaker in Khartoum, claims that the remainder of Sudan is not as relaxed. "It's a mix of freedom and censorship," he explains. "It's a battle that's about 10% won."

Khalid Albaih, a political cartoonist living in Qatar, came to Sudan after the revolution to establish the Sudan Artist Fund (SAF), which provides money and mentorship to aspiring artists, as well as an ambitious proposal to build a public art and design library. "I thought, 'This is it,'" he adds. We were going to do this since all of the doors were open.

"I packed all of my belongings, and for the first time in ten years, I'm walking around in Sudan, unafraid of any police, secret police, or anything." I went to every Sudanese company owner and anybody who could provide money to these organizations. And I was turned down for both a library and an artists' fund."

Albaih eventually received $7,000 (£5,300) from CultuRunners, a cultural exchange organization, and the SAF issued its first $500 grant in October, right before the coup. "It was incredible because the internet went down [after the coup leaders imposed a nationwide internet blackout], and the artist had no idea he'd won." We had no choice but to contact him. The money took two or three weeks to get to him," Albaih recounts.

For the time being, the cartoonist is aware that there will be no more money. "Right now, everything is shaky. Nobody can predict how things will turn out. It will be very difficult for artists and similar activities to make progress.

The coup left the artistic community "disappointed and just broken down," according to Diab, since "we finally thought we were free and then this happened." She plans to file for political asylum in the United States, where she is studying, since she believes she would be "of more use to Sudan" from there.

Those who are in the midst of it cannot afford to lose hope. Asim was teargassed for the whole day during a rally in Khartoum last week against the post-coup accord, amid cries of "no partnership, no negotiation, no legitimacy." He is realistic about the problems ahead, but he understands that people have made up their minds.

"I have the impression that there is a stranglehold on power that will not be broken today or tomorrow." "You never know with the ever-changing dynamic of power in this country," he continues, "whether those power-hungry authoritarians will roll with democratic transition and allow people to express their freedoms, allow journalists and film-makers to operate or not."

He claims that the trend toward democracy is clear. "I think it's possible, and I think there's hope." People will not cease demanding what they really want. Is that future going to arrive tomorrow? What about the next day? How about in two years? In five years? We never know what will happen. However, it seems that everyone agrees that it must happen."

Thanks to Lizzy Davies at The Guardian whose reporting provided the original basis for this story.