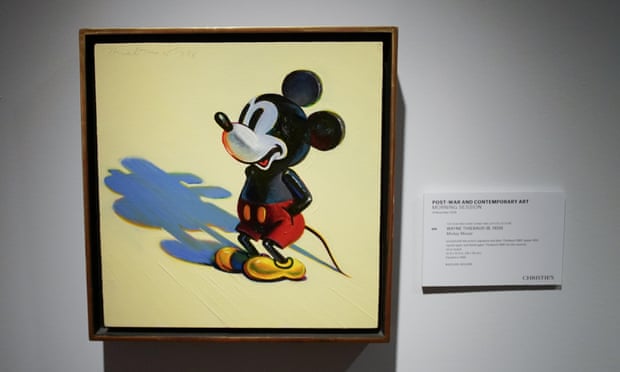 Few artists can say that Willem de Kooning and Walt Disney have had the same effect on their work. Wayne Thiebaud, a California painter, was one of them.

Thiebaud, who died at the age of 101, began working at the Disney Studios in Los Angeles as a "in-betweener" as a teenager, filling in the backgrounds of Mickey Mouse cartoons whose characters were created by veteran animators. He would be outspoken about his enthusiasm for cartoonists and commercial art in general for the remainder of his long life.

Thiebaud "went east to meet those heroes of mine," De Kooning foremost among them, two decades later, in 1956. New York was enslaved to abstract expressionism at the time. In a 2017 interview, Thiebaud remembered, "De Kooning and I could talk endlessly about brushstrokes and so on."

When he returned to Sacramento, he began painting again, focusing on the fundamentals - "Shapes, seeing if I could get them to sit on the plane, that kind of thing."

Patisserie proved to be an unusual meeting point for these two divergent streams of his art. On his 100th birthday in 2020, Thiebaud reflected, "If you really look at a lemon meringue pie or a beautiful cake, it's kind of a work of art." (When asked what sort of cake he would want to have for his birthday, he chose lemon pie.) However, it was a different filling that revealed the pastries' promise as subjects for his paintings.

Thiebaud began work on a still life of pumpkin pie in the early 1960s, maybe Pieces of Pumpkin (1962) or something similar. Thiebaud subsequently said, "I mixed a big gob of what I thought was the color and put it on the triangle." "I was astounded."

In order to save the painting, he created a second version with a blue and yellow under-drawing that showed around the filling's margins. As a consequence, the orange began to shimmer, a phenomenon Thiebaud coined "halation" and claimed as his own.

"When I first saw the picture, I thought to myself, 'Boy, if I paint that stuff, that'll be the end of me as a serious artist,'" he said half a century later. Pieces of Pumpkin, which sold for £1.6 million at Christie's in 2008, demonstrates how incorrect he was. (In 2019, his Encased Cakes from 2010-11 sold for £6.2 million, setting a new high for his work.) Thiebaud's shortcrusts and butter frosting piqued an interest in his work that no amount of Stakhanovite production could quench.

This was partly a case of mistaken identification. Pop art exploded onto the American landscape in 1962, the year of Pieces of Pumpkin. Thiebaud's pies and cakes were perceived as part of Andy Warhol's soup cans or Roy Lichtenstein's outsized cartoons' ironic materialism. This was not the case at all.

Despite its theme, Pieces of Pumpkin is affected by modernist concerns such as mark-making and the placement of shapes on a grid. The fact that the grid resembles a restaurant display cabinet and Thiebaud's paint markings resemble gooey pie filling is just half of the narrative.

Josef Albers, a severely abstract artist, likened his own square painting to butter spreading on pumpernickel. Thiebaud's pastries are as near to Albers as they are to Warhol in spirit, if not closer.

The symbolism of his sweets altered with time, even while the ingredients stayed the same. Iced cakes, like vehicles with tail fins, were a symbol of American luxury in 1962. Angel food had been replaced in the California diet by sourdough bread when Thiebaud painted Encased Cakes 50 years later.

Thiebaud had worked behind the counter at a Long Beach deli called Mile High and Red Hot as a youngster, and the piped cream and glacé cherries now reminded of that more innocent period. Whether or not his art was sad, it became associated with it.

Morton Thiebaud, a former inventor and motor executive, had relocated his family from Arizona to California when Thiebaud was six months old. Wayne's mother, Alice (née Le Baron), a telephonist at the time, came from a long line of Mormons: her grandmother had journeyed through the plains with Brigham Young, the so-called American Moses, dragging a handcart to Salt Lake City. In 1931, Morton relocated his family to Utah, on a small ranch he had purchased but lost three years later.

Even though living on a hardscrabble farm was difficult, Wayne remembers it as a wonderful experience. In his elderly age, he joked, "The Mormon community is very, very intersupportive."

"I was what you'd call a spoiled child today, I believe." The family had returned to California by 1934, where Thiebaud would spend the remainder of his life.

He was sent to the Frank Wiggins Trade School in Los Angeles (later renamed LA Trade Technical College), where he attended a signpainting course that led to a short career with Sears, Roebuck. The beginning of war cut short Thiebaud's unremarkable year at Long Beach Junior College — "I got one credit, and that was in public speaking and athletics," he ruefully admitted.

Under the supervision of Capt Ronald Reagan, he spent this time in the US army air force, producing a comic strip named Aleck for a military newspaper and subsequently, scenery for bomber training films. ("It wasn't a particularly pleasant experience," Thiebaud, a longtime Democrat, remembered.) During this period, he met and married Patricia Patterson, whom he married in 1943. Before divorcing in 1958, they had two children, Twinka and Mallary.

Thiebaud began training as an art instructor in 1947, first in San Jose and subsequently in Sacramento, using the GI Bill. He got a work in the advertising department of the Rexall Drug Company, where he met a commercial illustrator named Robert Mallary, after realizing that teaching would not be enough to support his expanding family. (Thiebaud's second child would be named after him.)

Mallary, the son of a Berkeley professor, also worked as a fine artist, exhibiting at the Allan Stone Gallery in New York. In 1962, Stone put on a performance for Thiebaud called Pieces of Pumpkin. Stone would defend Thiebaud until his death in 2006, against the advice of Barnett Newman, who advised him to "lose the pie guy."

There was something fundamentally American in both Thiebaud's life and his work. His work's formal seriousness was not the only element that set it apart from pop's glibness.

His drawings, like the guy who created them, were lighthearted and sincere. Thiebaud's abilities earned him the admiration of generations of students at the University of California, Davis, where he taught for 60 years, most recently as an emeritus professor. Bruce Nauman, a polymathic artist, was one of his Davis students.

Above all, Thiebaud saw himself as "one of those fortunate, fortunate people." It was impossible to tell whether he hated being stereotyped as a pastry painter. Visitors who only knew him as a vendor of pies were surprised by a retrospective of his art at the White Cube exhibition in London in 2017.

Portraits, such as the 1966 Green Dress, and so-called Delta landscapes, such as the elegiac Fall Fields, were among the pieces on show (2017). Thiebaud only admitted to having a dietary aversion to confectionary.

"I think I'd rather tell them, be careful about eating too many sweets and watch your vegetables," he said at the age of 100 when asked to select a dessert that would cheer up a Covid-stricken public. "Sugar is kind of an enemy of good health," he said.

Thiebaud married Betty Jean Carr in 1959, and she died in 2015. Paul, their son, died in 2010. Twinka and Mallary Thiebaud, as well as his stepson, the artist Matt Bult, and six grandkids, survive Wayne Thiebaud.

Thanks to Charles Darwent at The Guardian whose reporting provided the original basis for this story.