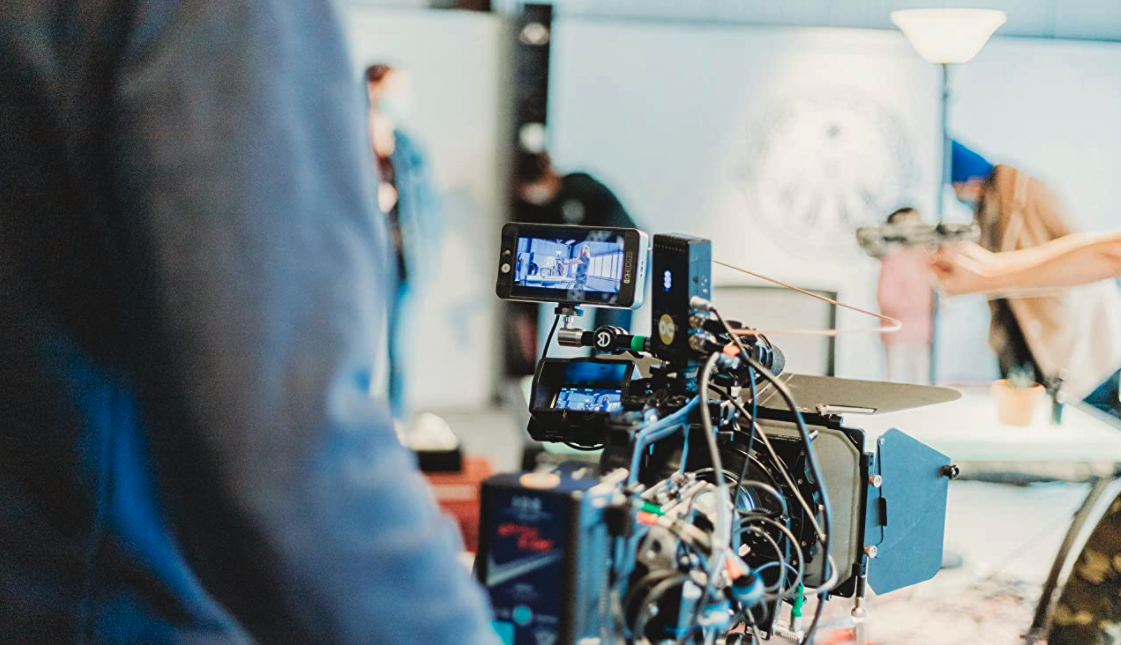 Narrative filmmaking can often require an entire production team to operate on a different level, carefully considering each tiny decision in the light of how it will affect the story and how that story will be communicated to the audience.

Genre can also play a big role during production, bringing to mind the nearly countless entries into each specific genre and how each one told its tale.

Expert cinematographer Steven Lindsay has a unique perspective on narrative filmmaking, as he has worked both in narrative film and documentary/lifestyle film and television, including the Food Network show 'You Gotta Eat Here!', which has won multiple Canadian Screen Awards.

Based in Toronto, Ontario, Lindsay has spent recent years focusing much more on narrative filmmaking. His work on the short film 'Bonecrusher' earned him Best Cinematography at the Hamilton Film Festival, and the film also won Best Narrative Short Film at the Kansas City Film Festival.

But when we interviewed Lindsay earlier this month, we really wanted to drill down into his work on two other short films: 'Obdurate' and 'Compliant'.

As you'll soon see, these two films are incredibly different in terms of genre, story, and setting. That means, of course, that Lindsay had to approach each one very differently to support each story as effectively as possible.

Both of these shorts have found success on the festival circuit, and Lindsay's cinematography work has no doubt played a major role in the execution of these fascinating stories.

Read on to find out how this skilled artist was able to create stunning visuals for these notable short films. 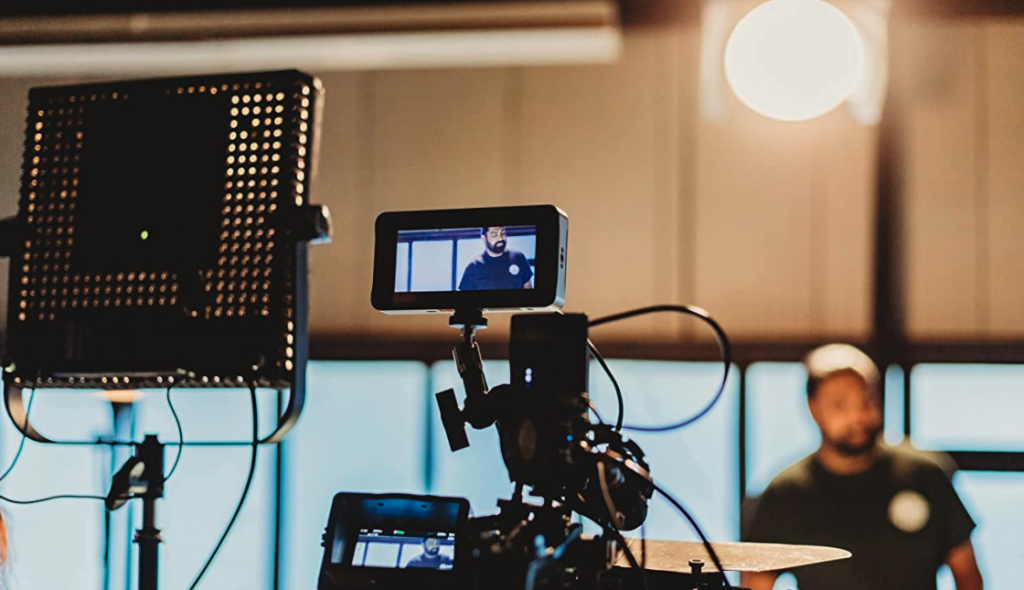 You're quite prolific. Have you always been highly motivated?

Lindsay: You can’t help but be motivated when it comes to working on these kinds of narrative projects, especially when it's one of Cynthia’s screenplays. She has a unique and interesting perspective on storytelling that I really enjoy.

I love the collaboration throughout the entire process. With the writer and director in preproduction, the crew during production, and the colorist in postproduction. Everyone is adding to the process and pulling in the same direction.

Can you give us a basic breakdown of 'Obdurate'?

Lindsay: 'Obdurate' is a fascinating story written by my good friend Cynthia Crofoot. Cynthia is an award-winning actor, writer, and producer. The film shows Cynthia’s character, Donna, in two different situations. In one situation, we see her on her wedding day. In the other, she is bruised and bloodied and sobbing as she deals with the trauma of an abusive relationship.

The story examines the idea of being able to change a past decision in your life, to be able to contact yourself from another time and place and send a warning. This idea brings up questions that are difficult to answer. On her wedding day, Donna receives a voicemail from a distraught woman warning her not to get married. The voice pleads with her to get out or face a murderous situation.

'Obdurate' is a mix of science fiction, fantasy, and horror, and it even has elements of time travel. These genres are well integrated into the story and do not stand out thanks to the relatable real-world setting. 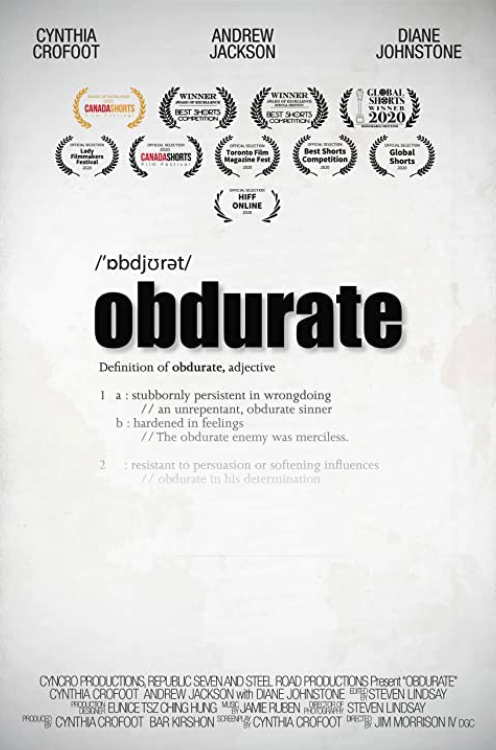 What did you prioritize the most while working on 'Obdurate'?

Lindsay: We shot 'Obdurate' in two days over a weekend. All the wedding day scenes were shot on the Saturday, and the remainder of the film in the late afternoon and evening on Sunday. In order to get the most out of our time and get the most out of our setups, I designed my lighting plan to have all my lights outside the house and use the windows as the main sources of lighting.

This lighting plan allowed us to complete all our camera positions with very few lighting adjustments throughout the day. I wanted to be as efficient with our time as possible.

There is a scene in the film where Cynthia’s character is pushed and falls to the floor. We worked with a stunt team in the weeks leading up to the shoot to coordinate and rehearse the fall. During these rehearsals, we were able to visualize and block the scene. With the shots worked out ahead of time, the camera setups for the stunt on location were done quickly and we could focus on the safety of the actor and performance of the stunt.

If you could go back, is there anything you would change about your approach to this project?

Lindsay: I can’t say that I would change my approach to this project. I’m very happy with the outcome. We put everything we had into it. We left it all out on the stage. I believe that each time you make a film, it teaches you something. You are always learning. You take what you learn and move it forward. The next project always benefits from the previous project.

I’m always looking at process improvement. Throughout my career, I have worked on many documentaries and doc-style projects. Most of the time on these projects you are working in locations sight unseen, and you are expected to make something wonderful out of it, usually in a very short time frame. It’s a challenge that you learn from each time. It may only be a small lesson, but that helps improve the process for the next time.

'Obdurate' has been very well received. It has garnered many awards and continues to do well on the festival circuit.

How about 'Compliant'? Was this your first time working on a film in the sci-fi/dystopian genre?

Lindsay: Yes, this was my first time working as Director of Photography in the sci-fi/dystopian genre. 'Obdurate' had touches of sci-fi, but not to the level that 'Compliant' did. 'Compliant' also combines the comedy and thriller genres, which I have worked in before and really enjoy. 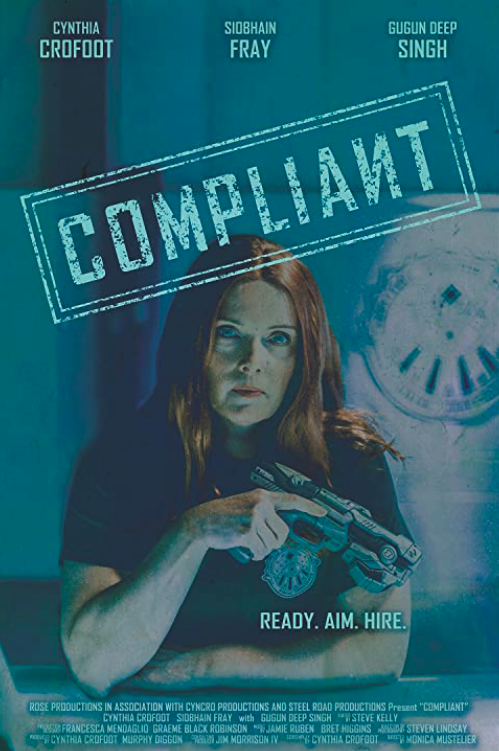 What was the highlight of this project for you?

Lindsay: The characters and the relationships between them really stood out to me. The dialogue had this great rhythm and we wanted to capture that in real-time as best we could.  These characters are facing life or death consequences, but somehow they have this wit and seemingly carefree attitude.

What was the biggest creative shift from working on 'Obdurate' to working on 'Compliant'?

Lindsay: The biggest creative shift from working on 'Obdurate' to working on 'Compliant' was that most of the 'Compliant' story takes place in one room. 'Obdurate' uses several locations within the house as well as scenes that take place during the day and at night.

Another shift is that 'Compliant' is a dark comedy. There are some lighter moments. 'Obdurate' is very intense. Even in the lighter scenes, there is this anticipation that something heavy is about to happen.

We shot 'Obdurate' with one camera. For 'Compliant' we used two cameras to capture the timing of the comedic dialogue and the reactions of the actors in real-time. To accommodate the two camera setups, the lighting plan had to allow for two distinct camera angles shooting at the same time. To achieve this, I was able to hang a light above the set and design a soft light source beneath the glass top of the table where the characters were positioned. 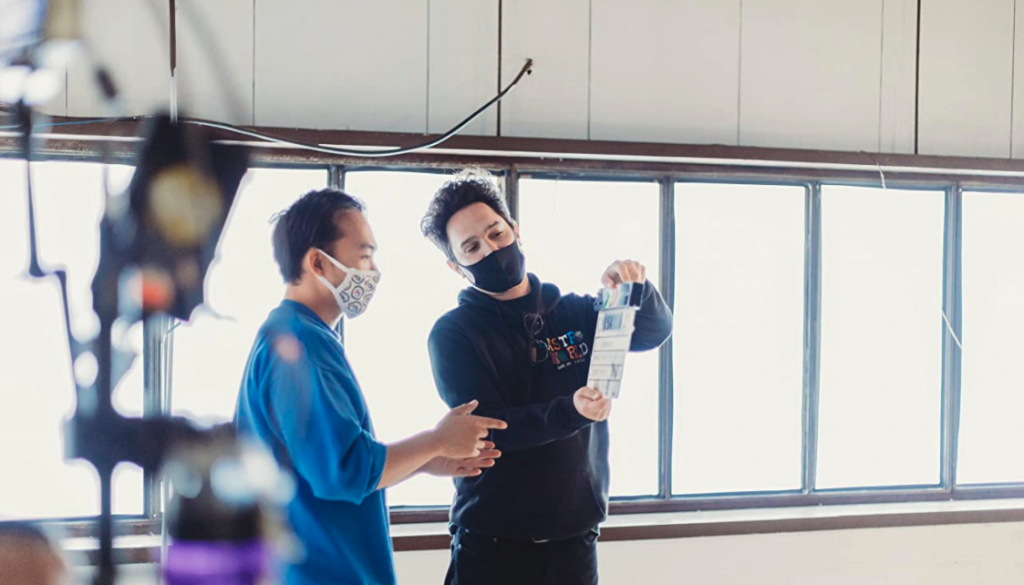 The result is that the cameras could be placed anywhere on set without resetting the lighting. By design, 'Compliant' has a mostly cool blue color of light on the set while the light on the characters has a warmer tone. To achieve this, the cameras and character key lights were balanced for 3200K.

Our location had one wall of windows allowing the cooler daylight, 5600K, to affect the rest of the set. The result is the set background and other set elements naturally turn blue from the cooler daylight and the characters maintain the warmer tone. This look was further enhanced in postproduction. The design and look of the lighting in 'Obdurate', for the most part, has a real-life feel and look.

Do you ever watch the finished versions of these films on your own time? Do you view them differently now?

Lindsay: I have watched the films again. I watched 'Obdurate' with a small audience at a screening. It was great to hear their reaction during the screening and later to get their perspective on the film.

And yes, I think you gain a different perspective watching the films again. There is some separation after a while. It’s nice to sit back enjoy the story without the level of intensity and focus you have when you are creating the piece.