‘I See Greatness Where Others See Crap,' Says David Shrigley 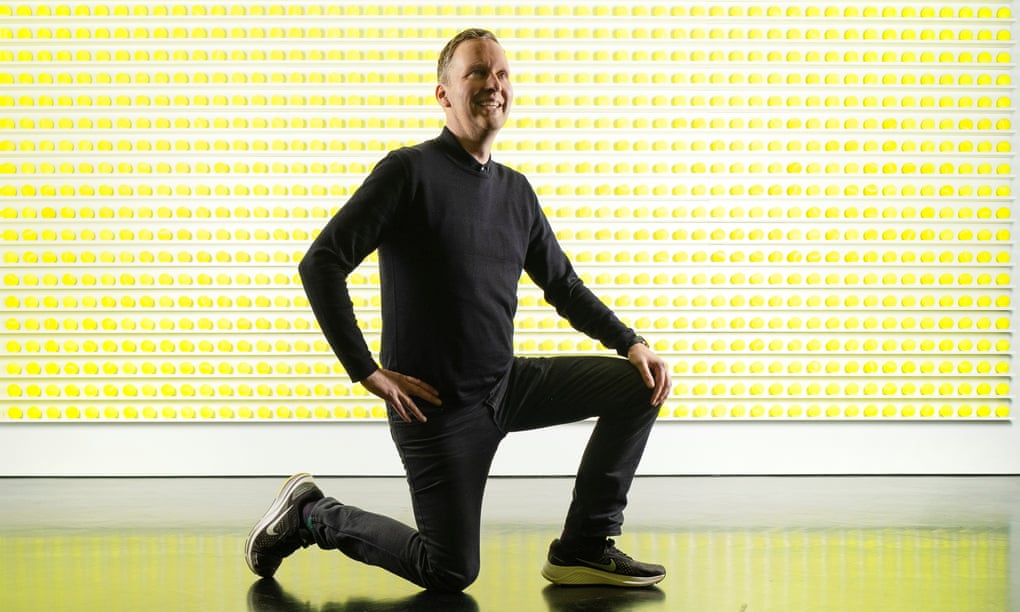 David Shrigley's balls are the first thing I notice about him. Twelve thousand, 166 of them, to be exact, were neatly lined up along practically every possible inch of the gallery walls. Walking around this bright yellow room is a rather trippy experience, as the bright lights and repeating patterns mess with your mind.

"It's turned out to look like a piece of op-art," Shrigley remarks, almost as if he had nothing to do with it. "I hadn't expected that."

This isn't going to be the case for long. The idea is that over the next two weeks, passers-by may come in and swap these brand new tennis balls for their old ones.

It reminds me a touch of Roelof Louw's 1967 artwork Soul City (Pyramid of Oranges), however instead of gradually fading as people engage with it, this will deteriorate into a grubbier form: a slow, hideous decay. Shrigley claims that the piece was inspired by concepts about commerce, money, and even his dog Inca's (lack of) ball retrieving talents - but I believe he simply enjoys the image of people doing something strange in the heart of Mayfair.

One of the greatest delights, he acknowledges, is not knowing what would happen next.

The project was inspired by a question many of us have asked ourselves during lockdown: "Why am I doing this?" Shrigley took the opportunity to rethink his work and realized there were certain things he no longer wanted to accomplish.

He says of the bizarre, hilarious, and scary drawings that made him famous, "I just didn't want to do another presentation of works on paper." "I was getting a little tired of putting on the same show over and over."

As a result, Shrigley began to create more conceptual pieces. A digital wall clock he created is on display across the street from the tennis balls exhibition, with the brilliant red LED numerals blurred, making it almost hard to see.

Shrigley is 53 today, but he was in a cab a few years ago when he realized the clock was out of focus. He required spectacles, as it turned out.

"I'm not sure why I made this," he admits. "It was quite costly, and I'm not sure what to do with it." He looks at it as if it were a work by another artist that he doesn't completely get, and he tells me how different it is from his regular manner.

I'm not convinced. I don't think it's altogether un-Shrigley to feel your vision deteriorate while the clock ticks down another minute closer to death.

We take a seat on several couches. Shrigley talks softly, in a calming monotone with little pauses, and you must listen carefully to determine what he is really concerned about and what is simply tangential babbling (the inner workings of my Dictaphone, for example). He insists that he still enjoys drawing: "It's sort of my life's project," he explains.

"The investigation is still going on, and it won't stop until I'm gone." However, he will sometimes say things that imply he finds the process, if not irritating, at least perplexing.

"I'm going to make 100 works on paper with the goal of only half of them being good," he adds. "And there's maybe four of them where you think to yourself, 'This is essentially wonderful!' This is me displaying my competence, while the other 96 are just efforts to do so.' Is it true that they sell? They're a bunch of jerks. 'Nobody purchased that?' you think as you glance over the inventory. That didn't sell, did it? So, what exactly did they buy?' And it's a kitten image or whatever."

He chuckles. "I've realized that my tastes are quite unique in comparison to the rest of the world." Others see garbage while I see ingenuity. They see creativity where I see garbage." He now allows the gallery decide which paintings to display.

The drawings that startle or perplex Shrigley the most are his favorites. "Where I think, 'It's kind of funny, but I'm not sure what it means... so I'll just throw it out there and see what happens."

It's the same reason he enjoys his more interactive work, such as inviting people to draw a giant urinating sculpture as part of his Turner Prize show, setting up pop-up tattoo parlors where people can get his doodles tattooed on them, or inventing a bunch of oddly shaped instruments and getting musicians to play them.

Sonic Youth's Lee Ranaldo, one of Shrigley's musical inspirations, gathered a group of avant-garde musicians and terrorized a New York restaurant with Shrigley's instruments. What did you think it sounded like?

He describes it as a "loud racket."

Shrigley grew up in Oadby, near Leicester, and was born in Macclesfield. As a youngster, his only exposure to art was via the covers of records (the Fall's Live at the Witch Trials was a favorite long before he heard it). But it was a trip to Tate Britain with his father in 1982 that piqued his interest: Jean Tinguely's kinetic creations led him to Dada - the absurdist art movement that erupted in Zurich during World War I – which he still considers to be the most pivotal period in art history. He describes art as "thinking of it as being in opposition to everything."

By the time he came at Glasgow School of Art, he'd become a "smart-arse" student as a result of his passion. His professors didn't always share his outsider perspective. Was he dissatisfied with his final score of 2:2?

Shrigley claims that the art school prioritized traditional craft, which reminds me of the Guardian's prediction that he "would win few prizes for drawing, and even fewer for his handwriting" - does he agree?

"Well, it depends on what the competition is," he laughs. "Let me put it this way: I was the finest artist in my class when I was six years old. I was near to the bottom by the time I finished from art school. I think it's simply not that essential. I do the drawings I do out of a desire to express concepts in the most cost-effective way possible."

He went through a similar process with René Magritte: at 14, he thought the Belgian surrealist was a brilliant painter, but by the time he got to art school and learned to sketch himself, he realized he wasn't. "And then, by the time I graduated, I realized that none of it really mattered," he continues. "It was all about Ceci n'est pas une pipe for me." That's such a powerful statement, illustrating the blurring of words and picture."

It's easy to see the connection between that work and Shrigley's. "On the other hand, someone like Salvador Dal has no interest in me," he continues. "Not as an artist, at least." If he were to host Bake Off, I'd absolutely tune in."

Shrigley graduated from art school with the impression that he lacked marketable talents. But then he obtained a job at an agency and hit success with his basic but distinctive mixes of drawings and text with strange shapes and twisted sentiments – "they said 'we like the way you think'" – "I'm in my playpen, and I'm having fun." The writing next to an imprisoned stick guy says, "I am very happy."

The caption accompanying a guy shooting a catapult at a hairy beast's bottom reads, "I don't know why I did it." His art has appeared on tea towels, salt and pepper pots (labeled "cocaine" and "heroin"), and greeting cards ("We will be glad to attend your wedding," reads one message, which runs the length of a cock and balls).

I inquire whether the current political turbulence has influenced his work, and he responds that it unavoidably has. They have a lot more profanity in them, he's observed. "On the other hand, there's less bloodshed."

Regardless, people read their own sentiments into them. "You think you're making a piece about the climate crisis, but it quickly turns into a pandemic because that's what everyone is thinking about." Unless you want everything you produce to be about Brexit."

He informs me about a project he's working on right now that's more difficult to misunderstand: "I've got 5,000 copies of Dan Brown's The Da Vinci Code, and I'm pulping them all," he adds, a touch of malice in his voice. "Then I'm making paper out of it, and on that paper, I'm reprinting a George Orwell edition of Nineteen Eighty-Four." He chuckles. "I can do it because no one wants to buy The Da Vinci Code any longer; instead, they want to deposit it." So that's what my project is about: 'Wake up!' We're on our way to becoming a totalitarian dictatorship!'

His joy fades: "Making that artwork feels like a very impotent gesture to me," he concludes. Which takes us to another big choice he made: selling his Brighton home and establishing Sidmouth School of Art in Devon, a mental health and welfare charity.

The project's four founders are now filing for nonprofit status and have approached a local GP practice about the possibility of sending patients to them. The prospect of being assigned to an art session with Shrigley conjures up images as bizarre as some of his own. "Is making a funny drawing about the mental health crisis more helpful than making an art project that helps people with mental health problems?" the artist asks.

He's not without experience: he spent five years in community education in Glasgow, where he resided for 27 years until relocating to Brighton in 2015. Working with the elderly, mentally handicapped individuals, and inmates was fulfilling for him, despite the fact that other tasks were more difficult.

Shrigley, I'm sure, will benefit from the charity as well. He's spent his career feeling "not like a fraud, but... a bit selfish, as if I'm just pleasing myself and enjoying my life far too much," he adds. He's recently started reading about individuals who have overcome severe discomfort by pursuing their creative passions.

"This one lady had a severe arthritic ailment that rendered her completely immobile. The discomfort subsided once she joined a chorus. The physicians have no idea how it works; all they can say is that she should keep doing it."

He sounds shocked once again by this endlessly perplexing, absolutely unfathomable phenomenon to which he's spent his life. "It was just so exciting to discover that art is... actually beneficial to people."

Thanks to Tim Jonze at The Guardian whose reporting provided the original basis for this story.