In One of the World's Longest COVID Lockdowns, a Girl Goes to School and Has Hair Cut 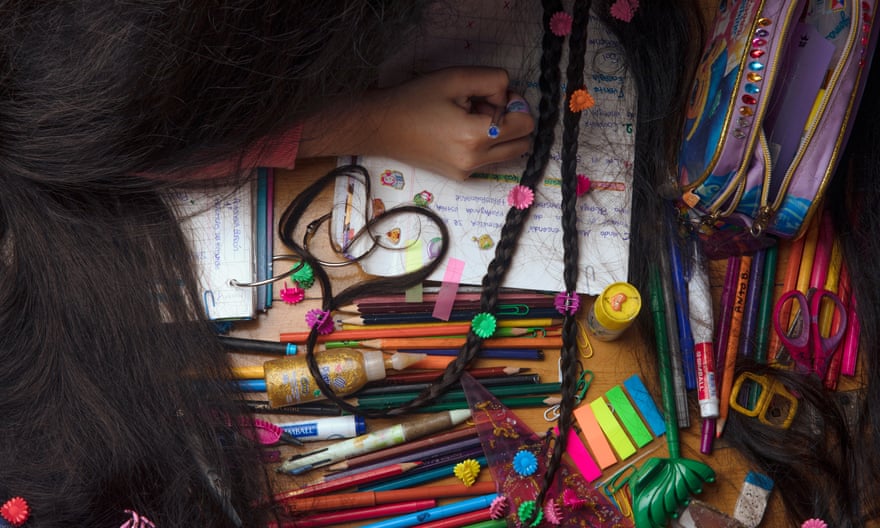 Antonella Bordon had problems sleeping once she finally cropped her hair. Her first haircut, when she was 12, was more than just a change of style for her.

Bordon's silky hair went all the way down her back to her legs during much of her youth, and it was such a dark brown that it appeared like a black mane. Her mother and sister would comb her hair every day, massaging rosemary oil into the strands and assisting her in styling it in a manner that would keep her cool in the scorching Argentinian summer.

"I felt like I was missing something the first night after I cut my hair, almost like I'd lost something," she explains, her face now framed by a short bob.

Though Bordon had always considered her hair to be a significant part of her identity, the previous two years have taught her to recognize what is really important to her. When her school was closed due to the pandemic, she was confined at her family's house outside of Buenos Aires, studying on Zoom through her mother's phone. She longed of the day when everything would be back to normal; the day she could rejoin her friends in the classroom and school halls. She made a pledge to herself that when the time came, she would shave off her almost floor-length curls.

Irina Werning, a photographer living in Buenos Aires, used to have unusually long hair as a youngster as well. She only realized this style was characteristic of Latin America after years of living overseas. "You have to leave your country sometimes to understand your country," she explains.

Werning has been photographing Argentina's long-haired girls for 15 years, attempting to understand why women and girls in the southern hemisphere preserve their hair longer than those in the northern hemisphere. The majority of her subjects give personal reasons, such as their mother looking after it or their grandma wearing her hair long.

Long hair, on the other hand, connects Werning to Latin America's indigenous heritage, as well as societies that feel hair is holy and an expression of one's self.

"Oral history is important in traditions and culture, since it is passed down from generation to generation without much explanation. "Here, the mother braids the child's hair, takes care of her hair, and it's become a cultural thing," Werning explains.

She started shooting Bordon's long hair three years ago and continued to do so until the epidemic hit Argentina. During this period, the images were more than simply about the hair; they reflected the tale of Bordon's experience as a young girl in a country that was through one of the world's longest government-imposed curfews.

"I always thought that if I cut my hair, something would be missing," Bordon recalls, "but when school was shut down due to the lockdown, that's exactly how I felt." A significant portion of her universe had vanished. Although this project started as a hair study, Werning was glad to learn that Bordon was finally going to chop hers off since it meant the research was moving forward.

"I wanted her to be able to go back to school," Werning explains, "so I actually wanted her to cut her hair, which was in direct opposition to my project." It had been a year and a half.

She took pictures of Bordon throughout the lockdown and after she returned to school. The next series, La Promesa (the Promise), has evolved from a hair narrative to one about the schooling issue and the inequity gap shown by the epidemic.

When the Covid-19 crisis struck, schools all across the globe were forced to shutter, but those in Latin America stayed closed for the longest time as the area tried to contain the virus's spread. Children in Latin America are believed to have missed around three months more of school than their peers in other parts of the world, and more than 3 million may never return.

Throughout the pandemic, the topic of education became highly politicized in Argentina, revealing the country's increasing disparities. More than 40% of the population is considered to be poor, a proportion that has been compounded by the national curfews.

Children in low-income communities were denied free school lunches, and many were isolated due to intermittent internet or lack of access to technology. According to a Buenos Aires think tank, one out of every four primary school kids in Argentina's poorest communities would drop out by 2020.

"Remote learning isn't for everyone," Werning explains, "because some people don't have a phone, there are internet issues, and some schools just send the parents exercises via WhatsApp."

When the city of Buenos Aires refused to comply with government demands to keep schools closed as Covid numbers climbed, the city was allowed to open at least three months ahead of the rest of the nation. Bordon's situation was made worse by the fact that she lived less than a kilometer from the city's boundary, and her school remained closed.

Werning depicts a curious adolescent who is separated from her peers due to lockdown. Werning explains, "I wanted to show her life in lockdown, which was very limited." "She shares a small house with her parents, who emigrated from Paraguay, measuring 30 square meters (322 square feet)." They were laid off from their jobs during the lockdown, so they decided to create a business in their house.

"I taught her how to use Zoom for lessons. I photographed her during a time when she was really concerned about her future, and I photographed her assisting at the business. Because she was not seeing her friends or doing anything, I shot her in extremely restricted scenarios; yet, her hair was the star of the show."

Bordon missed 260 days of school in total. Bordon was lucky in that she grew up in a home where education was valued, and her mother always made her phone accessible so she could study.

"Sometimes Zoom didn't work right," Bordon adds, "so it was impossible to learn, and the truth is I didn't understand a lot of things, and I didn't feel a connection with the school subjects." When I'm at school, I like it because I learn more and can ask questions.

"Since lockdown was difficult, I wanted a change and wanted to cut my hair when we returned to school after the quarantine." After being out of school for a year and a half, I felt like a completely different person."

Bordon got her hair trimmed at Werning's house when her school returned in September, accompanied by her father, sister, and mother, who grieved as they took turns snipping at her daughter's long hair. It's currently in a bag on Werning's table, ready to be donated and turned into a cancer-patient wig.

"Her hair had life," Werning adds, "and her long hair was her identity for me."

"The truth is, I wasn't sad when I cut it – I was happy," Bordon explains. "I've transformed into a new person."

Thanks to Naomi Larsson at The Guardian whose reporting provided the original basis for this story.