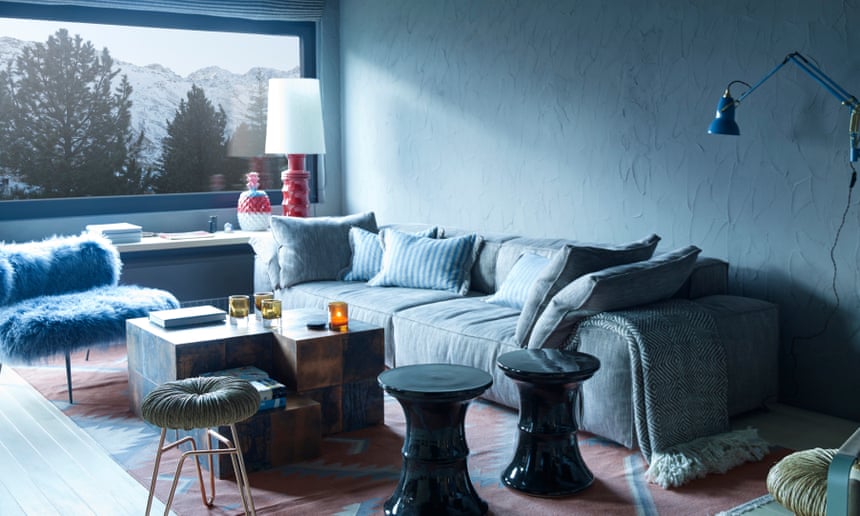 A three-bedroom ski lodge perched 550 meters above sea level in the Swiss resort hamlet of Arosa illustrates that a tiny place can seem large – and that a dated interior doesn't always need to be ripped out.

The property was built in the 1970s and purchased by Claudia Silberschmidt, a Zurich-based interior designer, in 2016. It hadn't altered in that time, and it was still decorated with 1970s-era fixtures and furnishings, such as wall-to-wall beige carpeting, dark orange tiles in the living room, and a beautiful wood-paneled suspended ceiling. During their trips that winter, she and her husband soaked in the chalet's old ambiance while pondering how they could change it.

"We wanted to embrace its 70s spirit rather than impose a wooden 'mountain chic' look," she explains. "To freshen it up without erasing its identity, which was originally what drew us in."

Silberschmidt comes from a long line of Arosa residents: her great-grandfather designed a renowned local hotel, her grandpa was the hotelier, and her father was born and raised in the hamlet. Silberschmidt remembers visiting the chalet as a youngster and feeling at ease there. "It's not a real beauty," she admits, "but it's the perfect size and location."

A partition initially divided a modest galley kitchen with black plastic countertops from the living and eating space; Silberschmidt dismantled it to create an open, shared kitchen, living, and dining room. She built a table made of natural spruce that wraps around a supporting column and serves as a kitchen workstation (inspired by a stack of newly milled lumber). Its far end resembles a Jenga block stack.

The kitchen is separated from the rest of the area by a built-in L-shaped bench upholstered in orange/pale pink fabric, a tribute to 1970s-style booth seating. Silberschmidt explains, "I wanted a simple 'no design' table." It's made of light, fresh wood that contrasts with the dark grey walls and ceiling.

She preserved the ornamental ceiling panel and painted it the same grey as the walls with blue accents for a nostalgic look. This hangs over the dining and living areas, separating them from the kitchen.

The living room is decorated in grey, blue, and red tones; the couch is upholstered in the same grey fabric (from Andrew Martin) as the drapes. The walls are painted the same color as the open fire, which has a mantle above it and a large shelf in front, as well as an original ornamental plaster surround, and the formerly orange tiles are painted grey.

A coffee table by British artist Paul Kelley, composed of copper cubes and resembling a Rubik's Cube, is surrounded by a succession of mismatched stools and chairs, including a fluffy blue love seat (for similar, see roselandfurniture.com) and stools. Silberschmidt (from frohsinn.ch) created the rug, and a vase and a 1960s ceramic lamp produced in the former West Germany provide color.

Many people are wary of utilizing dark colors in a tiny area, but when combined with "bright, happy details," it may really make the space appear bigger, according to Silberschmidt. "The contours vanish when you paint the walls the same color as the ceiling," she explains.

"The darker these colors are, the more powerful this effect is, and the ceiling and walls will 'fade away.'" Painting everything in the room the same color (including the fireplace and built-in cabinets) and avoiding harsh contrasts will make the room seem bigger.

Keeping the color palette neutral also means that if I want to make a change, I can only alter the ornamental components, such as the table lamp, carpet, or pillows, rather than painting the whole home."

Black shelving runs the length of the kitchen and living spaces, showcasing china, cooking pots, and books. A handmade ladder leads to the uppermost shelves under the gabled eaves. From a floor panel under the fireplace to chairs in the living room, kitchen wall lights, cutlery, and even an old milk churn on the staircase, copper is used everywhere.

Another big work was replacing the old windows from the 1970s with newer, higher-performing ones. Silberschmidt preserved its arching design but went with darker frames to draw attention to the scenery outside.

"It's a welcoming environment," Silberschmidt explains. "I like the simple act of starting a fire and the aroma it produces. It's ideal for replenishing the battery life."

Thanks to Jeremy Callaghan at The Guardian whose reporting provided the original basis for this story.