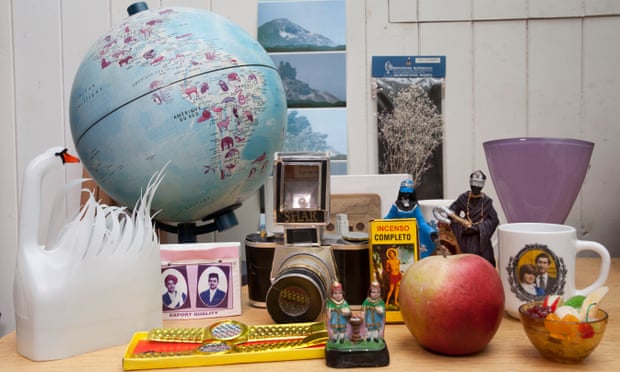 My traveling friends and I went through a 40-degree-heated plaza in Évora, Portugal, one day. We entered the seeming tranquility of a store selling domestic things, a bit crazy after seeing a church decked with human bones and the hair of young brides.

Except our macabre day wasn't finished yet. One of them was a hat-rack built of four sheep feet, their still-grubby hooves varnished, bent into L-shapes at their joints, and attached to a moulded piece of wood in a less-than-elegant manner.

It was purchased by me. I kept it even after it got overrun with ants in the manner of a Dal artwork. I took it back to the United Kingdom.

I only threw it away with considerable difficulty and under compulsion from members of my family who considered this progressively deteriorated thing unpleasant for some reason. As if it were a lost limb, I still lament it.

Much as a sheep whose feet had been turned into a hat stand would feel.

But that's okay. A vase made of pine cones from the Taygetos mountains in Greece, a glow-in-the-dark Virgin Mary from a religious store in Brixton market in London, and the Little Lovemaking Monk, an item of extreme poor taste from a joke shop in Hull's Paragon Arcade, may all help me feel better.

Also included are food models similar to those seen in Japanese restaurant windows, as well as an ashtray and lighter shaped like the "Bird's Nest" stadium erected for the 2008 Beijing Olympic Games. (Which, one imagines, was the last time it was judged permissible to sell smoking-related merchandise for this athletic event.)

It's easy to assume that since I write about architecture, I only surround myself with the finest stuff. "Have nothing in your house that you don't know to be useful or believe to be beautiful," William Morris once stated.

This is excellent advice. Except I don't always follow it: some of the things I live with are clearly ineffective, and others may be deemed unsightly by some. You might call a lot of them kitsch, but that's a negative term for items that, in some way or another, deserve respect, with the probable exception of that Hull monk.

What they have in common is their lack of regard for taste hierarchies, and their unconcernedness about whether or not they are Design with a capital "D."

Part of the appeal is nostalgic. More effectively than a snapshot, these items may remember a time and place, this or that vacation or business trip, the people I was with, the heat in the air or the fragrance of the woods, the weight of food or the haze of drink.

They are globalisation's antidotes. It's a delight to stumble upon a product that could only originate from one location in a time when identical arrays of brands abound on the major avenues of cities all over the world. Some, like Soviet-era postcard volumes of mountain ranges, baroque buildings, or Rubens paintings purchased in Tallinn, Estonia, have the potential to depict vanished places.

Things that reveal a desire, a dream, or a belief, and where you can feel a feeling of connection with the creator, pull me in. And, with The Maker, I have representations of almost all global faiths in my collection.

Many of the works deal with death, love, or hope in some way. I have boxes of soap, produced in Argentina and purchased in Spain, with colorful graphics implying that using the product can aid a saint with school exams and marital conflict.

I like the absurd, such as a pop-up cardboard replica of the huge palace erected in Bucharest by the dictatorial President Ceaușescu, an item that is more delicately created than the edifice itself. A plastic ashtray featuring a replica of Goya's La Maja desnuda is an example of the ludicrous.

I appreciate someone who boldly followed the logic of tourist souvenirs, which is to apply an iconic picture to an ordinary product, to its logical, though startling conclusion.

When these objects are brought together, they reveal the extents to which things are alike and different, in the same way that a felt fruit might chime with one carved from wood, or a metal Turkish clock with the plastic grotto that houses that luminous Virgin, simply because they are the same blue-green color. There are scale jumps — a little castle, an enormous clock – as well as foiled or fading technology like lenticular postcards, clockwork, and outmoded vehicle models.

In my collection, there are a lot of skeuomorphs, which are objects that seem to be something other than what they are. It's not truly a collection, since it implies more direction than there is. A better term would be accumulation.

The manner something is produced, as well as what it tries to express, may all contribute to a feeling of connection. The perfection of little trees and kitchen units for architectural models purchased in Tokyo's massive and spectacular Tokyu Hands department store will wow you.

Small enamel coffee cups, deep red from Barcelona and leaf green from Salvador, but otherwise similar, have the allure of doing something simple well. While not dishwasher-safe, the pine-cone bowl purchased from an elderly lady at a lonely stand on a mountain road is magnificent.

Those items that merge image and making are my favorites. These include cardboard replicas of precious items that are commonly burnt during Chinese funerals so that, even if some of them become antiquated, they might be enjoyed in the afterlife: Rolexes, a Walkman, and an SLR camera.

Both the concept and the execution are stunning. I also have a swan that lights up from within, constructed from a plastic milk bottle by the artist Madelon Vriesendorp - who, incidentally, is a considerably more competent accumulationist than I am.

In a nutshell, all human life is present. There's frugality, ingenuity, imagination, and luxury, as well as skill and mistake, naivety, and cunning. In my everyday life, the things serve as suggestions, diversions, and ideas. They show purpose in material, which I am constantly on the lookout for, whether in a cathedral or a coffee cup.

Thanks to Rowan Moore at The Guardian whose reporting provided the original basis for this story.