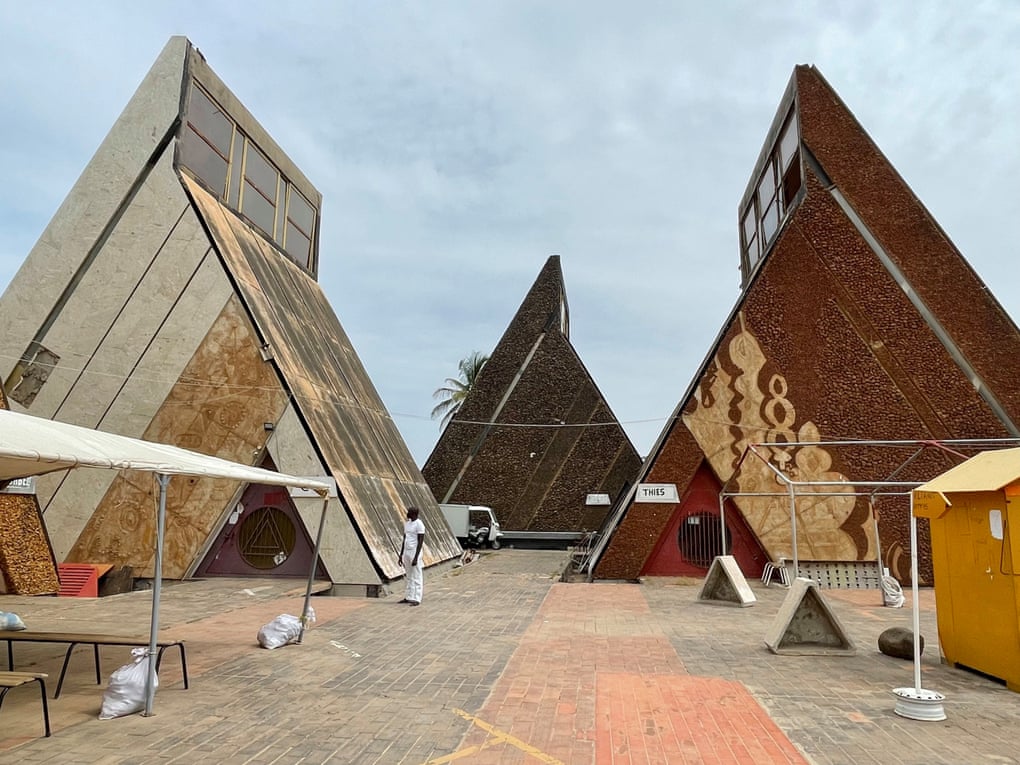 Visiting the Dakar International Fair is like strolling through the remains of an old Toblerone-obsessed civilization. A podium supports a cluster of triangular pavilions, each clad in a rich pattern of seashells and pebbles.

Triangular stairs go through triangular plant pots to significant triangular entranceways. Great hangar-like shelters, ventilated by triangular windows and capped with serrated triangle roofs, reach into the distance all around. Only triangular honey from triangular bees is missing.

The remarkable city-sized tribute to the three-sided form was conceived by young French architects Jean Francois Lamoureux, Jean-Louis Marin, and Fernand Bonamy on the outskirts of the Senegalese capital as a showcase for world commerce in 1974. Their compulsive mathematical composition was an effort to respond to Senegal's first president, poet Léopold Sédar Senghor, who called for a "asymmetrical parallelism" national style.

Senghor was keen to utilize the arts to construct a new national identity, free of western heritage and drawing from African civilisation, notably Sudano-Sahelian traditions, "without wavering from the requirements of modernity," when the country obtained independence from France in 1960. Senghor never completely described this bold new style, although he did mention "a diversified repetition of rhythm in time and space" in passing. The craze was for robust, faceted shapes and forceful, rhythmic geometries.

Senghor's aims are being met through a number of entities in Dakar. The international fair complex is the most stunning, with its tent-like structures littered with everything from animal horns and shells to clay pipes and twisted volcanic rocks, vaguely resembling a nomadic desert community.

It's in bad shape, but a Getty-funded restoration effort is underway, and it's still possible to see how it tried to pave a daring new route by mixing contemporary technology with indigenous traditions to create an expressive, sculptural language anchored in its surroundings.

Many of these designs are included in the Atlantic coast volume of Sub-Saharan Africa, a massive new architectural reference that spans 3,400 pages and includes over 850 buildings from 49 nations. The magazine, which took seven years to complete, gives an enlightening cross-section of the continent, from the gleaming skyscrapers of Angola's oil-rich Luanda to Mali's mud mosques and Burundi's art deco architecture.

It has over 350 writers, half of whom have African ancestry (it's also available in separate volumes, so you can spread the weight of the whole 8kg set out).

While far from complete, the book seeks to fill a gap by mixing descriptions of historic, vernacular, and current structures, examining them in the context of race, gender, and power, whether colonial, neocolonial, or local.

On a recent trip to Dakar, the book proved to be a helpful companion in deciphering the city's tangled urban structure. With curving rocket-like obelisks jutting from its corners, painted a deep rusty red, and rain spouts recalling the overhanging wooden beams of traditional mud building, one strange confection seemed like a fantasy modernist version of Sahelian mud architecture.

This is the Institute of Social Hygiene, which was created by architect Henry Adenot in the 1930s, when the French colonial rulers abandoned their normal beaux arts style in the spirit of cultural integration and strove to adapt structures to local circumstances.

Any local influence was mainly superficial: the ochre-colored walls are reinforced concrete that has been painted to seem like sun-dried soil. In Senegal, French architects mostly took influence from Sudanese and Moroccan designs - popularized by international expositions in Europe – while disregarding the Wolof, Serer, and Fulani peoples' traditional architecture.

The postcolonial architecture of the 1970s and 1980s, most of it by Senegalese architects Cheikh Ngom and Pierre Goudiaby Atepa, as well as French architect Henri Chomette, stands out for its uniqueness. They all established their own brand of modernism based on President Senghor's asymmetrical parallelism beliefs.

With a creative use of stones, rocks, and shells to impart a tactile, rougher texture to the nearly primitivist shapes, monolithic tapering pillars, frequently in rough-textured concrete, support massive chiseled volumes.

One of the greatest venues to view this sort of art is at Dakar's Cheikh Anta Diop University. Chomette and Roland Depret created a cluster of lecture theatres in 1976 that consists of five white, curving, windowless buildings set on textured brick plinths and grouped around a kind of village courtyard.

Closer inspection reveals that the bobbly white surfaces are painted seashells, and the streaked brickwork is meant to resemble tree bark. You enter the intriguing white cocoons from the courtyard, which hold steeply sloped lecture rooms plunged below the earth.

Cheikh Ngom's faculty of law and political science has an equally significant presence. Its knobbly red lava rock walls, which are coated with a kind of supersized volcanic pebbledash, are flanked by tapering buttress-like fins, which open out to expose a shaded open-air lobby with plenty of places to relax and speak out of the sun.

With brise-soleil screens, deep-set windows, and huge overhangs to enable as much passive cooling as possible, buildings from this period demonstrate a considerably more sensitive attitude to the local environment than subsequent creations. The Chinese-built big theatre and the Museum of Black Civilizations, Dakar's two recent prize projects, have a could-be-anywhere look and must be completely air conditioned.

Both are the work of Abdoulaye Wade, Senegal's president from 2000 to 2012, who had a thing for large cultural trinkets that he could sign. The most massive, in the shape of the spectacularly kitsch African Renaissance Monument, towers over the city on a hill to the west. The 49-metre-tall bronze monument, which depicts a ripped topless man and his copiously bosomed, barely dressed wife, complete with pointing infant hoisted aloft, was created by North Korean artists at a cost of $30 million (£22 million).

It is taller than the Statue of Liberty and has been widely mocked as a symbol of the previous president's extravagant spending, since he claims intellectual property over the monument and still earns 35% of ticket sales revenue. Many Dakarians seem to agree with the late Senegalese master sculptor Ousmane Sow, who described the monument as "aesthetically childish and banal to the extreme."

Even so, after you've ascended the 200 steps to the top, you'll get a magnificent view of the bustling metropolis below.

Given the quality of what is presently being created – and the fact that the sole formal architecture school shuttered in 1991 – it's tempting to believe Dakar's architectural golden period has passed. Many post-independence constructions have been destroyed or disfigured to the point of becoming unrecognizable.

However, a new generation of young architects and engineers rediscovering traditional skills gives a ray of light, according to the book. I hadn't given the Djoloff, my hotel, much consideration until I saw its enlargement cited in the brochure as an example of compressed earth brick restoration.

Doudou Dème, who studied earth engineering in Grenoble before returning to Senegal to start his firm, Elementerre, in 2010, erected the seven-story skyscraper.

Dème and his coworkers confront an uphill battle in a country hooked to concrete, where cement bricks are cast on site for nearly every kind of structure. However, the advantages of his earth bricks, which are low-carbon and very insulating, are obvious, particularly when paired with organic typha insulation panels.

They eliminate the need for air conditioning by providing thermal comfort and humidity regulation. A future of planet-friendly asymmetrical earthy parallelism may be possible.

Thanks to Oliver Wainwright at The Guardian whose reporting provided the original basis for this story.