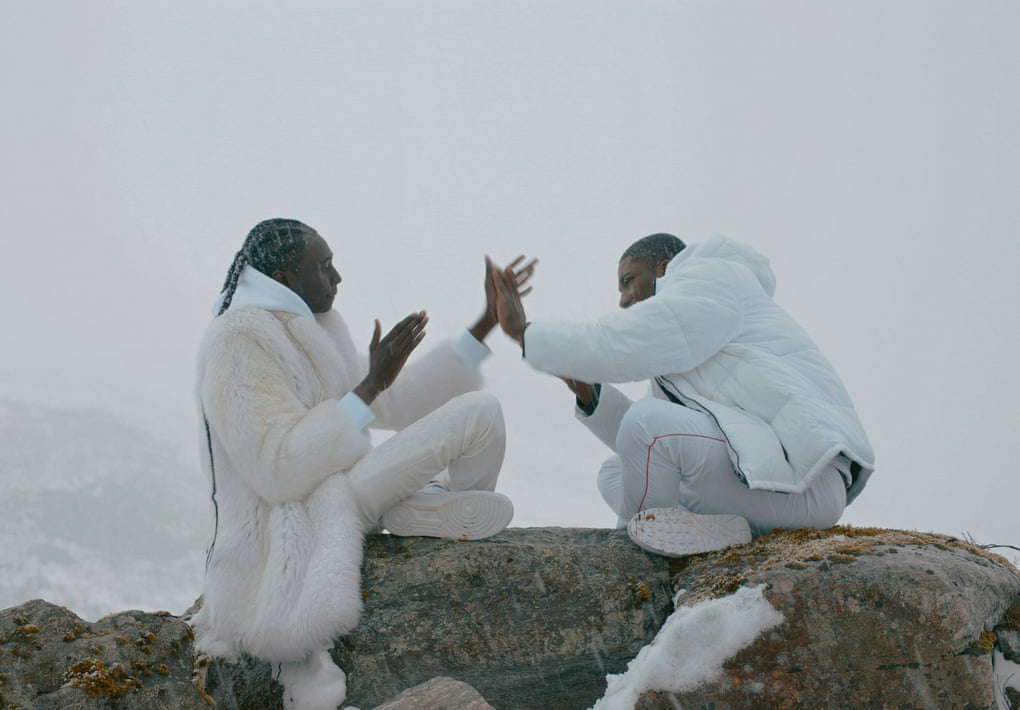 Kehinde Wiley, an African-American artist, is most known for his official image of Barack Obama, who sits in his chair, tieless and casual yet profoundly melancholy. Emerald greenery encircles him, entwining his ankles and bursting into jewel-bright blooms that represent his Kenyan and Hawaiian ancestors.

Yet the 44th president is put into this enormously beautiful thicket, photoreal to the last detail. This is a typical Wiley fantasy.

He paints men (and sometimes women) he encounters on the streets of the United States or Senegal, where he has studios, or in London, where he obtained models for this recent display. Wiley elevates these figures by placing them in well-known works of art, such as Holbein's The Ambassadors or Ingres's equestrian painting of Napoleon, which is now mounted by a New Yorker wearing Timberland boots. He uses art history to pit beauty against politics, with the overt goal of creating both aesthetic and political dissonance.

Wiley has inserted a Senegalese kid in a long overcoat into a copy of a Caspar David Friedrich painting — a single person gazing out over spectacular mist-furled peaks in a landscape of Romantic longing – at the National Gallery. However, in contrast to Friedrich's small figure, the modern wanderer is gigantic, so the effect of his race is stronger - albeit the painting itself, at almost four metres high, is also huge. Here, past art has been magnified to make you think about who owns the landscape, history, and art.

The folds of the overcoat have a blue glow to them, indicating that the original shot was taken in a studio. It's never any question that Wiley's paintings are created from digital images.

Another Friedrich revisit — his renowned Chalk Cliffs on Rügen – has two guys in Nike sneakers playing pat-a-cake in the center, with one of them turning to stare us right in the eyes, bringing the old picture into the present. Two more are stranded on freezing green waters, one rowing furiously and the other scanning the horizon for land or rescue: terrified migrants, their foreheads glinting in the arc lights.

The Herring Net, a beloved American classic by Winslow Homer, is the inspiration for this artwork. There isn't a single piece here that is related to anything in the National Gallery. Wiley's Ship of Fools II is inspired by Bosch's namesake work, as well as Géricault's Raft of the Medusa (both in the Louvre).

It depicts four black individuals marooned on a boat (whose mast is a Bosch tree), waving and crying for rescue. Two more are plainly standing on a studio floor, presumably in the water.

Nonetheless, the scene's sheer artificiality is the visual counterpart of Brechtian alienation. You can't imagine these needy individuals imprisoned inside the tight confines of a European masterpiece. The old delusions have been shattered.

Wiley cares about brands like Nike ticks, Evian bottles, and Timberlands, as well as fashion, cosmetics, and intricate cornrows and dreads. These are worldwide indicators of the times, a lingua franca that connects the tragic news of black children drowning in the Channel to the horrible news of black children dying on the passage between Haiti and Florida.

Each T-shirt, knock-off watch, and logo is painstakingly recreated for a specific reason, yet it's unclear who did it. Wiley hires artists from Beijing, Africa, and America to paint these massive statements.

The craftsmanship is remarkable, yet the compositions are sometimes off. These boats don't sail on genuine waves, and their people never get wet, much like Obama doesn't quite fit into his seat.

When photorealism meets the language of 19th-century art, from Friedrich to Homer to the artists of the American sublime, whose euphoric colors sneak into this display, it poses a danger as a style. There are a few flaws and holes here and there that reveal Photoshop's shortcomings.

This may be one of the reasons why Wiley's six-screen film installation, Prelude, is the show's masterpiece. The middlemen — literally, the old (and new) artists – are left out. In the dead of winter, Wiley took a group of black Londoners to the freezing wastelands of Norway.

His camera captures them awestruck in front of glacier fjords and mountains that vanish into cold fogs. In his vintage coat, an elderly guy picks his way through heavy snow. Faces framed in white hoods against the atmospheric white-out, two teens collect snowflakes on their eyelashes. Two ladies boldly giggle despite the chilly weather as they play pat-a-cake.

The soundtrack includes a powerful orchestral composition by cellist and composer Niles Luther, as well as Ralph Waldo Emerson's thunderous exhortations to learn to live alone in nature. Some passages are as brief as haiku, consisting just of a footstep or a smiling face; others accompany the characters on risky trips; and yet others are sweepingly panoramic.

But it's all about black folks in a white wilderness, which Wiley views as a type of prison, and the painful revelation of people who had never seen, or been seen in, such a harsh terrain before, their eyes pouring in the freezing cold.