‘We'll Have to Convene About This!' Says Array Group After Winning the Turner Prize 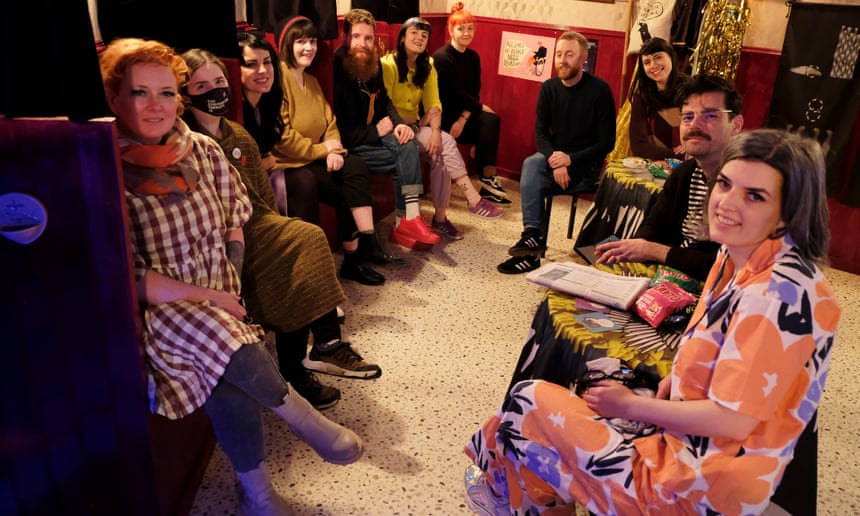 It's the morning after the night before, when the 11-strong Array Collective from Belfast, together with two babes-in-arms and one small golden-haired infant, came onto the Coventry Cathedral platform in their glistening finery to win the Turner Prize. Emma Campbell, Sighle Bhreathnach-Cashell, and Stephen Millar have offered to speak for this bunch of pals despite their hangovers.

Each has their own creative practice, but they won the award as a group, using outrageous costumes, witty banners, and a lot of black humour to advocate for subjects like women's rights, language rights, and LGBT rights.

When you walk into their section of the Turner Prize exhibition at the Herbert Art Gallery and Museum in Coventry, you're engulfed in the dark, cosy, and faintly anarchic arms of a lovingly recreated sbn, or illicit bar, where every detail – from the banners hung from the ceiling to the ashtrays painted with Ulster's red hand – has some story, some significance in their history of campaigning on often difficult and painful issues like abortion.

"Our sbn is almost like a self-portrait of Northern Ireland," Bhreathnach-Cashell explains. When visitors, even English tourists, visit Northern Ireland, they invariably comment on how kind the people are, despite the turmoil. We see the irony in it. But we were also thinking to ourselves, 'Let's make [our segment of the play] a nice place for folks to sit and absorb it and take their time with it.'"

The warmth of the room serves to defuse the tensions and traumas that have shaped Northern Ireland's history and present – and to invite people to stay and reflect on them in an environment that isn't too worthy or didactic. "Would you rather be in the pub or a gallery?" Millar asks.

When asked what they meant to do with the £25,000 award the night before as they stood on the stage, they mentioned doing something about the deteriorating quality of the studios they share. The reality of being a member of a collective is more carefully considered this morning: "Of course, we'll have to have a meeting about it," Campbell adds.

She'd attempted to persuade everyone to think about what they'd do if they won before the reward ceremony, but no one wanted to jeopardize their chances. (They imply that making choices as a group is exactly as tough as you would think.) Meetings are much more difficult to schedule since everyone has a paid job to support their art. "In Array, there are no trustafarians," Campbell explains.)

After they were nominated for the Turner Prize, they received word that the building they were renting in Belfast had been sold and that they would have to go in 18 months. According to Bhreathnach-Cashell, it's not simply the usual theme of gentrification following in the footsteps of artists, but "terrible town-planning and capitalism gone mad."

They claim that there are a lot of buildings in the city center that are unused, yet the rents have skyrocketed. They'd want to remain in the center so that anybody may drop in and manufacture or pick up a banner if a march occurs.

The Turner Prize is in for an interesting year, with the judges opting to shortlist only collectives. That was partially pragmatic, given the cancellation of several of the exhibitions that would have otherwise been considered (the award formally recognizes an artist's displays in the year before nomination).

It was also a political move, putting community, social activity front and center during the epidemic. Some thought it was a strange choice - the award had been converted into a series of bursaries previous year, and the selected artists had declined to be pitted against one other the year before, accepting the reward jointly.

"The Young British Artists' explosive, neoliberal individualism has given way to the notion of art serving a social purpose," said Jake Chapman, who was nominated alongside his brother Dinos in 2003. "I'm just curious as to when it will meld with Social Services."

However, "explosive neoliberalism" will not be mourned by everybody. Nonetheless, the first Northern Irish artists to receive the award are a collection of regular, non-starry artists for work that some may suggest extends the notion of art to breaking point, rather than superstars Willie Doherty or Cathy Wilkes.

This criticism is dismissed by Array. "All art is political, even if the artist doesn't think it is," Campbell argues. That is, all artistic creation, including how it is sponsored, is wrapped up in its political context.

On the other hand, the way Array draws attention to the issues they support is full of beauty. A video of the Druithaib's Ball, which comprised a phantasmagoria of performances, storytelling, and extravagant costumes giving a carnivalesque joy to an often gloomy, tough, and divided political setting, is on display in their sbn in Coventry.

Not everyone who attended was a member of the collective; the event was part of a larger festival of art in Belfast and abroad, commemorating the centennial of Northern Ireland "in our own way." Richard O'Leary, a gay rights activist, gave a poignant (and genuine) account about Northern Ireland's "fairies," purposely merging the meanings of the term to give his story a magical undertow.

Members of Array, which includes Catholics and Protestants, also use pre-Christian Irish folklore to bury a more recent history: that of British colonialism's legacy and the sectarian divide that otherwise plagues them at every turn. "We want to provide a counterpoint to the sectarian green or orange," Bhreathnach-Cashell explains. "However, it pervades everything at the same time." It's ingrained in us as a result of our time there."

The Sheela-na-Gig, an ancient feminine emblem holding wide her vulva, has followed them on marches for reproductive rights, which are currently in shambles in Northern Ireland as Westminster and Stormont squabble over abortion regulations. The Morrgan, a shapeshifting creature from Irish legend, was a "very good representation of the 'virgin, mother, crone' idea; this very restricted idea of womanhood, especially from the likes of the DUP, who restrict what women can be," according to Campbell.

The Morrgan (a.k.a. Campbell) recently traveled to Westminster "to beg for reproductive rights." Millar has created his own figure, the Long Shadow, whose shadow is the unresolved war trauma that no one ever sees and which continues to have major implications on suicide rates and mental health in the area. "There was a civil war here," he adds. And no one ever mentions it."

The atmosphere changes from time to time, becoming lighter and more naughty. One banner in the sbn says, "Prepared for peas, ready for sausage war" — a reference to one of Belfast's most renowned paramilitary murals, which reads, "Prepared for peace, ready for war," followed by a frightening picture of armed, hooded men.

The rephrasing by Array is a dig at the "sausage war" and the DUP's earlier this year concern that British bangers would struggle to find their way to Northern Ireland as a result of Brexit. It's a typical Array move – to disarm, in every sense, the region's violent symbols of the past. "The culture here sometimes just hands you a joke on a plate," Campbell explains.

Whatever you think of the Turner Prize and its current path, it's difficult not to be inspired by the collective's sense of optimism, desire for change, and hard-won humour — a ray of light in the dark.

Thanks to Charlotte Higgins at The Guardian whose reporting provided the original basis for this story.